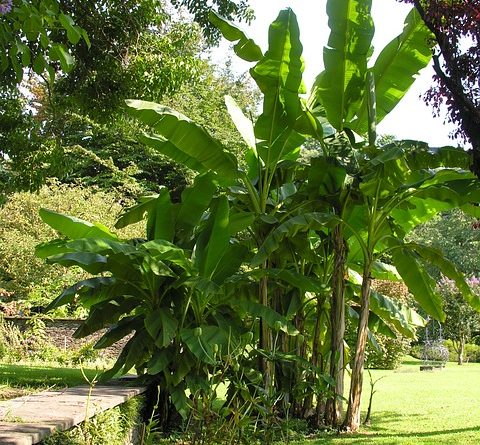 We teach our students that absolute advantage is an important driver of international trade. With the ecological ceiling in mind, we might need to revisit this concept to make it 21st century proof.

To remind myself: a country has an absolute advantage compared to another country when a product, often raw materials or agricultural produce, cannot be produced everywhere in the world. In the classroom I often use the example of bananas, although, observing how well the banana plant in my own garden, in Europe, grows, this might not be a future proof example. Better, climate independent, examples are phosphorus, which can only be mined in a couple of countries across the world, or rare metals.

It is needless to say that importing goods from countries with less stringent environmental legislation increases the likelihood that the production of these goods has contributed relatively more to climate change, for example, than production under more stringent legislation would have.

With the same level of legislation in place, the odds are better. In 2007, the University of Manchester was commissioned by the EU to examine the likely impact of an EU-Mercosur Association Agreement. The study found that a free trade agreement could lead to less energy consumption during production because the energy-intensive parts of the manufacturing sector would be largely transferred to Europe where, in general, firms are more energy-efficient than their Mercosur counterparts. However, the study concluded that this would be countered by a larger increase in carbon dioxide emissions arising from the increase in international transport.

This study was not one of a kind, and, as to be expected with a myriad of trading-partners across the globe, the outcome is not unequivocal.

While writing about this concept, I came to see absolute advantage as the playing field. The playing field is not level. There will always be climatological, geological and ecological differences and differences that have to do with the lay of the land. These differences, together with the passage of time have put us where we are now – and it changes continuously.

Economic agents are players in this playing field and will go where it suits them best. Companies settle in countries where they can best meet their needs. Countries will try to make themselves attractive for other players, and people go where life takes them.

It is the cumulation of the actions of all the players in the field, together with the rules of the game, that determine the outcome. We can, of course, name this absolute advantage, but if we want to create an outcome that is best for the planet and its inhabitants, we need to understand what the leverage points of this system are – and for that we need to understand the playing field.

Image by Karin Redecker on Pixabay