The last post I shared was on the four lenses applied to (de)merit goods. I received an extensive comment on that post in my mailbox, which was very much appreciated. In that comment the author pointed out that students are never asked by the IB to judge whether a good is a (de)merit good. This is likely for practical reasons, since most goods, like the electric cars example I used in my previous post, have both positive and negative externalities associated with them. But when students are presented with (de)merit goods in an example, it is assumed they are either one or the other – black and white.

Now, obviously, I do not want to make economics more complicated than it already is for many students, however, some of the complication arises from the things left unsaid. I once had a student who quit the subject because she was so disheartened about the singular way complicated issues were treated in economics.

Moreover, when asked to evaluate an economic policy, like an indirect tax or a subsidy, it might be difficult to circumvent the analysis I did in the previous post. Take a subsidy on electric cars. When I want to evaluate this, I first ask myself: “what is the reason for the subsidy? Why does the government want to stimulate the sale of electric cars?” When they want to reduce CO2 emissions, electric cars could be one way to achieve this, but you just have to go over the global column in the four lenses approach to realise this may not be that straightforward. Why not spend the same amount of money on making cities climate resilient and improving public transport?

The classical economic evaluation would be the one based on the price elasticity of demand: Will the government achieve its goal through a subsidy? When the government sets a total budget and a subsidy for each car up until the budget is depleted, will it increase total sales or will it only subsidise people who already intended to buy an electric car and are now pocketing the grant money? Or when it subsidises until a predestined increase in (estimated) sales is reached, what budget will be involved? This could subsequently be compared to other alternatives to reduce CO2 emissions, like banning cars completely from areas where other modes of transportation are a viable alternative.

But let us now turn our attention to the subsidy itself and apply the four lenses to it:

This time, I left the individual lens out, since we are looking at this from a policy perspective. I assume on an individual level subsidies are much welcomed and taxes are not – in general.

Let us now apply this to the subsidy on electric cars: 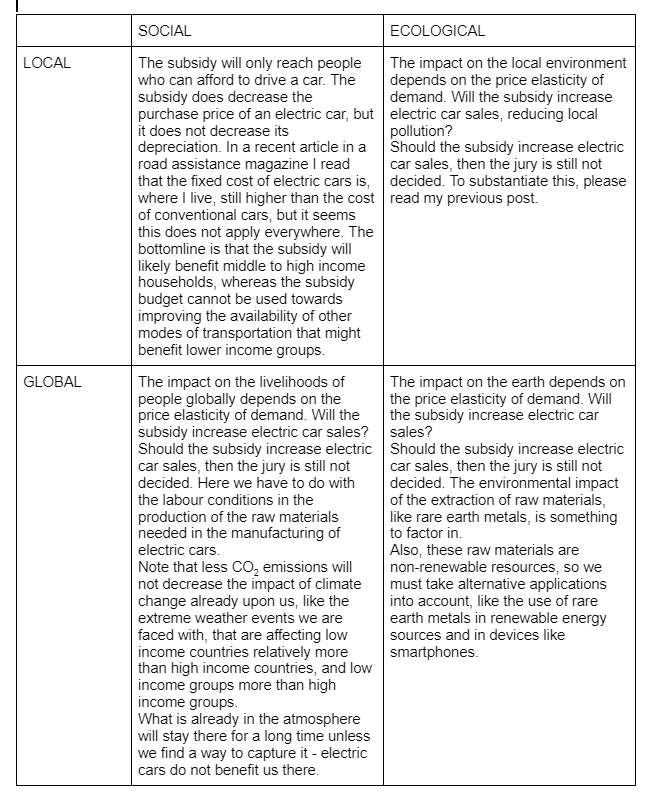 You may think my analysis is biased and you may be right. I abhor the charging stations for electric vehicles. But I do hope I made clear how to apply the four lenses to economic policy – feel free to add your own insights.

What I did not go into yet, are the unintended consequences of a policy – any policy. What if the subsidy is a huge success and numbers of people make the transition from a conventional car to an electric car? The second hand market for used conventional cars plummets, they cannot be remanufactured into an electric car since the bodywork is too heavy, so we are now saddled with a pile of scrap and not enough capacity to recycle it.

What we would like to achieve, is that the four lenses, or 4-part framework so you like, becomes part of the IB’s “accepted, well-defined criteria and mark schemes”, so that students are allowed, even encouraged, to use them in the exam’s essay questions. This would be a natural way for teachers to include the doughnut model in their courses, since students would be rewarded for using the four-lenses framework on “evaluate”-type questions.